Our websites use the analysis software Matomo for the statistical evaluation of visitor access.
Ok Learn more
Scrollen
Scrollen

A video will open up presenting the text in sign language.

The main artery of the Ruhrgebiet

The opening of the Dortmund-Ems canal created a new commercial artery for the Ruhrgebiet. Mass goods like coal, ore and building materials could now be directly transported along the canal to the harbours on the North Sea, or brought from there into the Ruhrgebiet. The ship lift was a hive of activity. 40 boats a day were taken up and down in the moving troughs. Nonetheless the boatmen often had to wait several days before they could get through.

The old ship lift served the canal for 70 years before being replaced by a modern ship lift in the immediate vicinity. After its closure the splendid old construction fell into a state of dilapidation until the regional authority decided to take it over and restore it as one of its sites belonging to the Westphalian Industrial Museum. 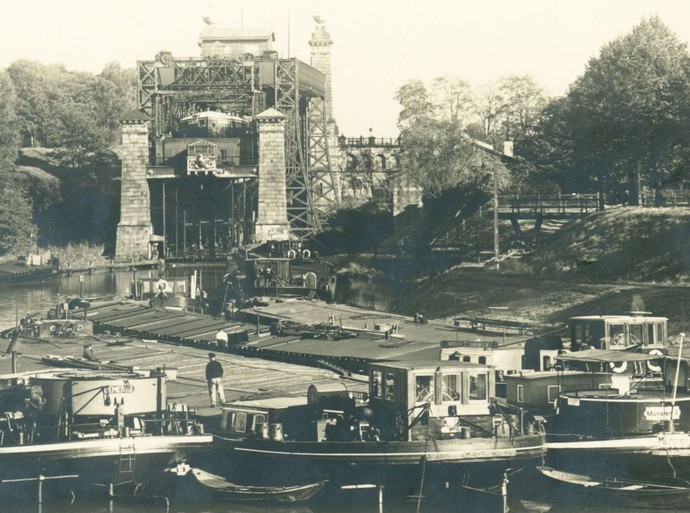 Nowadays it is scarcely conceivable that over 100 years ago two of the most important tools used to build the Dortmund-Ems canal were pickaxes and shovels. The project was an incredible tour de force. Thousands of workers, many of whom came from abroad, were involved in digging out by hand the 230 km long water channel, the sluice chambers and the deep shafts that held the floating chambers of the ship lift.

This was an engineering triumph. Because of the incredible technical achievement boats were able to move quickly and efficiently 14 metres up and down between the two levels of the canal. If you want to find out exactly how the ship lift worked you can try your hand at a model in the boiler and engine house in the museum. This was where the electricity needed to drive the ship lift was once produced by steam engines.

On our museum ship, the “Franz-Christian“ you can find out more about how the boatmen and their families lived on board. Conditions were anything but romantic. The tiny cabins in which the families cooked, slept and ate will give you a vivid impression of the lack of space under the deck. On the “upper water” the harbour scenery is typical of the time around 1900. The “Ostara” barge is tied up at the quay alongside other historic boats. From time to time there are special exhibitions in the loading room on the barge. The revolving crane, the flap gate and the lift bridge are all original historic features.

Your browser is out-of-date!